Celebrating Mardi Gras with these Seared Shrimp Po’ Boys and Creole Slaw! They're a super tasty, easy and healthy twist on the Louisiana classic that's perfect any time of year.

Why You'll Love this Recipe

When it comes to shrimp or oyster po' boys, they're typically battered and deep-fried. I'd much rather lighten things up by searing the creole-seasoned shrimp and pocketing those calories for a beignet later.

You can certainly buy creole seasoning, but it's so easy to make a batch of your own. I use the one and only Emeril Lagasse's Creole Essence to have on hand at all times. It's great on seafood, fish, beef, pork, and poultry. The recipe is included in the Notes at the bottom of the recipe card.

It takes just a minute or two per side to sear the plump shrimp to perfection in a hot skillet. The seasoning encrusts the shrimp as they cook for deepened delicious flavor.

The creole mustard based slaw is all of ten ingredients and complements the seared shrimp perfectly. Plus, you can prep it in advance.

Once your shrimp are ready to go, halve fresh rolls and slather them with remoulade or mayo, add crisp Boston lettuce, and pile on the shrimp. Topping with the tangy slaw and some pickles add super scrump flavor and crunch. Roll up your sleeves and enjoy. Cheers to Mardi Gras, friends! 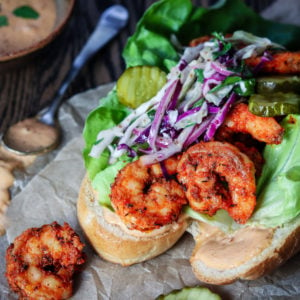 *Emeril Lagasse's Creole Essence - combine all ingredients and store in an airtight container at room temperature
Tried this recipe? Pin it for Later!Mention @giveitsomethyme or tag #giveitsomethyme!